An eChem Expo panel discussion on enhanced reality technologies took the form of a rapid-fire reality show with a gaggle of exhibitors allotted six minutes each to pitch a product or service as though they were addressing potential investors. Eastman innovation representative Bryan Shackleford played host to the proceedings and appointed judges to choose the two best presentations.

First, attendees learned from Scott Sommers, Index AR Solutions vice president of client and corporate development, that his company brings technology and engineers from the ship-building industry to projects in process-industry plants. That juxtaposition gives chemical plants access to augmented-reality that can help workers who actually turn wrenches in the field to do their jobs better, Sommers maintained. “We don’t augment reality – we augment the person,” he said.

Next came Ian M. Klein, chief revenue officer for Aegex Technologies, an intrinsically safe hardware manufacturer. The company’s products, which work with any computer operating system, enable executives and operators to take their offices into the field, Klein said. Aegex places cameras on tablets to accomplish the reverse, making it possible to monitor the inside of a tank from an office located miles away.

Hands-free, augmented-reality goggles replace safety glasses and don’t interfere with the job while they’re transmitting pictures from the plant floor to an office

Speaker John Marino, Daqri director of North America enterprise sales, told attendees that his company’s wearables link digital content to the real world. Hands-free, augmented-reality goggles replace safety glasses and don’t interfere with the job while they’re transmitting pictures from the plant floor to an office, granting the ability to “see” through walls or importing CAD models to compare them with the real world, according to Marino.

Craig Williams, partner solutions architect at Amazon Web Services (AWS), told attendees that his company builds tools and services to help people in the room innovate in augmented reality and virtual reality. AWS serves millions of active customers, and it works with ISVs, SaaS partners and consultants, he maintained.  “We have many more times capacity than our next 10 competitors combined,” Williams said. Last year, the company added 1,430 new services to the platform, he noted.

An audience member gestured emphatically while posing a query during the session’s question-and-answer period.

C3 IoT senior director, alliances, reported that the company “plays at the intersection of technology trends” and applies AI to data from legacy systems. The company’s platform enables users to unify disparate sources of data, he said. By applying machine learning to data, the company can reliably predict when equipment will fail, thus eliminating unnecessary replacement and reducing down time when replacement makes sense, according to Vignocchi.

Sean Everett, Realwear Inc. vice president of business development, noted that the two-year-old company began production in earnest of its tech-loaded hardhats at the end of last year. The company’s team is experienced in making rugged smartphones. “We have a lot of experience in the augmented reality industry,” he said. “That’s why we were able to do hardware like this in basically no time at all.” The company’s hardhat incorporates a computer with a camera and the ability to show video aids – such as diagrams – to its wearer. Everett said. The hands-free device responds to voice command and doesn’t interfere with performing manual tasks, he emphasized.

By applying machine learning to data, a company can reliably predict when equipment will fail, thus eliminating unnecessary replacement and reducing down time.

OSIsoft makes infrastructure that extracts, contextualizes, normalizes and prepares data from any source to do many different things, according to Craig Harclerode, the company’s global O&G business development executive. The technology enables companies to realize value securely from AR and VR platforms, he maintained. Thousands of companies use the technology to create templates that are combined to form the digital equivalent of a physical system, he continued. It drives intelligence into the AR or VR infrastructure, he said.

Lawrence Whittle, CEO of Parsable, described his company as a mixture of Millennials and 30-year industry veterans assembled to help industry leave the analog era behind. “Digitalization is inevitable,” he predicted. Whittle outlined a future where automation continues as robots take on additional industrial tasks, and additional cloud-connected sensors are linked in the Internet of Things. Unfortunately, however, workers may not take a strong interest in connecting with the technology that is proliferating, he noted. Parsable, therefore, makes software that’s easy to use, Whittle maintained.

As the rapid-fire presentations ended, moderator Shackleford praised them for serving up “a lot of information in a short span of time.” He characterized the speakers as “tremendous sports” for adjusting to the session’s unusual format and announced the two winners of the competition. “You thought on your feet, you reacted well and did fantastic,” he said. The anonymous judges picked OSIsoft for the first round of funding and Realwear for the second, Shackleford reported. 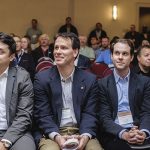 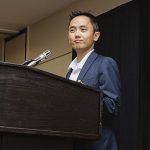