The digital twins that GE creates to mimic plant equipment have a lot in common with the microscope that Antonie Van Leeuwenhoek used when he was one of the first people to observe microorganisms, according to Tim Holtan, a GE Digital product manger.

Pond water that had appeared empty to the naked eye is clearly teaming with tiny plants and animals when viewed beneath the microscope. In much the same way – at least analogously – digital twins seek out variations from expected values that fall within typical alarm limits and are too small for people to spot, Holtan said.

Early detection of those variations allows for orderly replacement or repair before a problem can cause a disruptive failure or shutdown, he noted.

Without that kind of preparation, equipment fails unexpectedly and “the world is falling apart and people cut corners and do the wrong thing,” said Norm Stewart, GE Digital enterprise account manager. “So we help people predict the reliability of their machines.”

GE can notify a plant several weeks before a problem occurs, Stewart maintained. “So instead of waiting for the machine to deteriorate and fail, you can plan the outage, take the machine down, get the work done properly and make sure the right procedures are followed.”

The prognostications come about through software with predictive analytics, Stewart continued. Current performance is compared with the ideal performance of the digital twin – or model of the machine – to detect shortcomings, he said. “We can tell when something is beginning to rattle around in the compressor or we can tell when Bearing 3 is out of round by four microns,” he claimed.

GE Digital acquired the seemingly prophetic technology in 1999 when it bought SmartSignal Corp. Holton was working for SmartSignal and made the transition to GE Digital after the company was purchased.

SmartSignal had been founded to commercialize algorithms the U.S. Department of Energy developed for fault detection in a breeder reactor, Holtan noted. The company sold enterprise software to the power generation industry and the oil and gas industry.

What’s new at GE Digital is the Predix platform that provides cloud capabilities that bring scalability and lower costs, Holtan said. “The paint’s still wet on that,” he maintained. The GE executives described Predix as the only cloud platform built for industrial applications to manage data generated by machines.

Other platforms come from IT-related companies and use unstructured data or transactional information, Stewart said. They won’t handle and make sense of the exponentially increasing volume of data machines will supply in coming years, he said.

GE developed Predix to use in-house and now offers it to other companies. “Only GE could have done this,” Holtan asserted. “GE is into this for billions of dollars.” The platform reduced GE’s cost of goods sold by half a billion dollars a year, he said.

GE, its partners and its customers are developing applications that run on Predix in a manner that Stewart likened to the proliferation of ways to use Apple products. “Customers get a complete store of applications,” he said. “They can build their own apps and monetize them, just like people developing for Apple.”

“If you want a digital twin for a ball bearing, there’s a micro service for that,” Holtan said by way of further explanation.

Software provides advantages over the work that equipment accomplishes on its own, Waggoner maintained. “You’re using the right machine and getting the most out of it,” he said of the difference. “We can do things at network speed, not relying on a person to make changes and do the things that have to be done.”

Asset performance management can shift “unplanned” to “planned,” bringing marginal improvements in production, Holtan said. In large scale manufacturing processes, profits are made at the margins, so every extra barrel of throughput or pound of production represents almost pure profit, he said, concluding that “the volatility of profit is much greater than the volatility of revenue.”

That’s resulted in creation of a company called Current, which is reducing the cost of energy consumption with solar panels and other projects, Holtan noted. “Some of the top people in GE have been assigned to Current, he maintained. “So expect Current to really make a splash in terms of sustainability in coming years.”

Current is built on the industrial internet, Stewart said. “Digital is now a thread through everything we do because the leverage you get from software makes a tremendous difference in our factories and for our customers,” he said.

In one example, GE is extending the life of compressors in ethylene plants from the old standard of six years to the “nirvana” of 10 years, Stewart said. That type of efficiency reduces plant emissions, he noted.

Meanwhile, GE is conducting research to improve plants in other ways. It has developed a coating, for example, that catalytically reduces the buildup of residue in tubes at ethylene plants, Stewart said. That results in higher conversion rates and higher yields, while eliminating carbon dioxide release.

In the realm of cyber security, GE bought Wurldtech in 2014, Stewart said. Wurldtech prevents criminals from interfering with monitoring equipment. “While there is a lot of effort to protect data, we’re protecting the control side,” he said.

To showcase what’s happening at GE the company devoted half of its booth space at eChem Expo to the Predix platform. The rest of the exhibit real estate showed off asset condition monitoring and maintenance optimization.

Research that eChem Expo conducted to shape the conference and help select exhibitors indicated that young engineering graduates seem to think they can find answers to their problems on the internet. GE is reacting to that trends in two ways.

First, GE’s products are attuned to mobile devices. Second, software captures knowledge to preserve it for future use and eliminate the need to rediscover it. The technology also enables an expert to “look over the shoulder” of a worker performing a chore a thousand miles away.

The Expo also seeks knowledge that can help companies make quantum leaps forward and get a clearer view of the future. Contemplating what lies ahead, Holtan compared Predix to Facebook when the social medium was available only on the Harvard campus. In a few years the platform could spread to billions of machines in much the same way Facebook has spread to billions of users, he predicted.

“When Predix becomes ubiquitous, it will allow companies to have business plans that we can’t even imagine,” Stewart said. “The only way you can do that is with software and the digital thread, which is like the digital twin.” 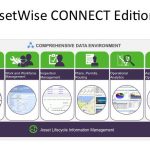 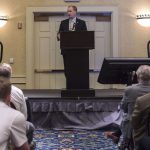