This system facilitates optimization by identifying a plant's under-performing controllers

Control Station, a Connecticut-based company with global reach, helps optimize chemical plant operations by making it easier to analyze and optimize the hundreds or even thousands of PID controllers that regulate temperature, flow, pressure, speed and other chemical process variables.

It may come as a harsh surprise just how badly those PIDs are doing their jobs, according to Bob Rice, Control Station vice president of engineering.

“You can have what you think is a well-running plant, but in truth your controllers are not being very effective,” Rice says. “They’re not running in the correct mode. They’re being saturated. They’re not tracking targets based off of objectives.”

When those problems go undetected, equipment isn’t functioning the way it should, he notes. But Control Station can step in to assist in setting and maintaining standards.

“I’m really passionate,” Rice maintains, “about taking that complex PID tuning idea, the loop analytics, the loop monitoring, the predictive analytics and applying it in a way that is so easy that anybody can do it.”

Control Station can serve as a mentor to plant personnel, teaching them to monitor controllers to spot inefficiency.

PIDs— which take their name from “proportional integral derivative” — should not be confused with PI&D, a common acronym in the industry for “piping and instrument diagrams.”

That possible point of confusion aside, the need for an easy-to-use system for monitoring PIDs provided the impetus for Control Station to become a commercial entity in the field in 2004, notes Dennis Nash, the company’s president and CEO.

Displaying the data gleaned from the PIDs on a digital dashboard that’s convenient to monitor and relatively easy to understand enables process technicians to follow the action effectively. Because of Control Station’s technology, it’s no longer necessary for PID monitoring to require the skills of a process engineer.

That’s important because personnel with less training are carrying out an increasing number of plant functions. Universities are turning out fewer engineers, and community colleges are training more technicians in instrumentation, robotics and automation.

Those factors make Control Station’s expertise vital, and that’s where Nash and Rice come into the picture.

Control Station simplifies the task of monitoring the thousands of controllers in a plant.

Our passion is taking the complex and making it simple.

The two executives came together at Control Station and pooled their skills despite bringing very different backgrounds to the company.

Rice began his career in theater and television production, working for Disney in Florida. But he changed his major and eventually earned a Ph.D. in chemical engineering. In grad school, he found a mentor who taught one of Rice’s favorite classes in a process control lab.

Nash majored in history and became a speech writer for politicians. He switched to sales and marketing and went back to school to earn an MBA with a concentration in finance.

Although their paths differed, they came to share a vision. First, they saw the need for a plant-wide monitoring system that would detect which PID was the bad actor. Second, they wanted to make the system accessible to personnel who aren’t trained engineers.

“There’d never been heavy attention to how people actually interact with the tools, and to make them easier to use,” says Rice.

Nash agrees, adding that “a lot of the tools in the marketplace at the time were engineering tools for engineers, by engineers. They weren’t very intuitive.”

They decided to employ their skills to rectifying that situation. Rice used his training in videography to create simple, pleasing images that portray the status of controllers. Nash used his expertise in marketing to get the word out on what they were creating.

“You give them just what they need to do the job,” Rice says of the Control Station product. “We hide all the fat — all the buttons and bells and whistles that nobody ever touches — to focus on the parts of the tool that are important and relevant.”

Nash puts it this way: “Our passion is taking the complex and making it simple.”

The company’s software doesn’t just throw numbers on a screen and leave users to interpret them. It provides graphics that show what’s happening with the PIDs.

Take the example of a brewery that signed on with Control Station. Electricians instead of engineers were tuning the PIDs.

“So, there was a mismatch between the job title and the background and training that they had for this important aspect of control,” Nash notes.

Control Station pointed out the discrepancy and pointed the customer in the right direction.

In another example, a refinery that covers 10 square miles assigned responsibility for monitoring more than 10,000 PIDs to just three process engineers.

With Control Station’s training, the refinery was able to shift more of the responsibility for those 10,000 PIDs to the 120 operators working at the site.

Often, assisting plants comes down to analyzing data and presenting the results in an accessible way. It also requires understanding that not every job a plant performs is the same.

In the past, operators didn’t change the way they ran plant equipment when processing different products, Rice maintains.

If a plant is processing four products with four operators at the controls and each process has startup, running and shutdown, that’s 4 x 4 x 3, which yields 48 conditions or possible scenarios.

“How do you track the behavior of those systems without getting lost in the weeds?” Rice asks rhetorically. The answer lies in tearing the data apart and putting it back together again. It’s called collapsing and expanding across the metadata.

It’s a process that will come into focus for eChem expo attendees in Control Station’s booth and seminar.

You can have what you think is a well-running plant, but in truth your controllers are not very effective.

Control Station focuses on several of eChem Expo’s focus areas, with special emphasis on capability enhancement, a process the company often refers to as optimization, says Rice. It’s a matter of understanding constraints and bottlenecks and then eliminating them.

The No. 2 focus area is safety and environment, a major tenant of good process control is making everything safe, he maintains.

Digital transformation, another focus area of importance to the company, occurs as it converts raw data to usable information, Rice notes.

In the Control Station booth at eChem Expo, the company’s personnel will be on hand to demonstrate software for PID monitoring on two simulation systems, Rice says.

Attendees will see the analytics, displays and reporting. They’ll learn about everything from troubleshooting to training curriculum.

In an eChem Expo seminar, the company plans to feature its PlantESP performance monitoring tool, which analyzes loop performance on a plant-wide or enterprise-wide basis, Rice says. He intends to explain state-based analytics, which is how the company uses sophisticated control narratives to handle many different conditions and then simplify the results.

Instead of looking at 20 different metrics, users can benefit from OCE — overall controller effectiveness — to track performance with a single number.

That single number makes it easier to set benchmarks for controllers, Rice continues. “What is best in class,” he asks. “Do all of your controllers average 20, or 30% of OCE, or 90 or 100%?”

Once a plant uses that OCE number to help attain better efficiency, the number also helps keep plants operating efficiently instead of falling back into the doldrums.

And the company is set to help customers use that number.

From its offices in Connecticut and Ireland, Control Station has deployed software-based tools to customers in more than 70 countries. The company works with half of the manufacturers listed in the Fortune 500.

The breadth of those operations gives the company a wealth of data it uses to recommend benchmarks.

The company prides itself on its strong culture, as illustrated by the longevity of its personnel. Employees who stay for two years will probably stick with Control Station for at least 10 years.

At Control Station the staff endeavors to understand the goals at a plant so that they can show users how its software will help achieve them. It’s a matter of mentoring customers and building a workflow.

How plants use the tool varies. Some check the digital dash dashboard frequently. Others find weekly or quarterly reports sufficient. Whatever approach a plant chooses, Control Station’s tool can help, Rice and Nash agree. 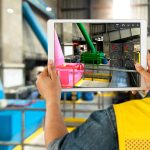