Step Aboard the Siemens Showcase

For a trip to the immediate future

Siemens Industry, Inc. plans to park a massive mobile showcase on the exhibit floor of eChem Expo to display aids to digitalization, says Don Mack, Siemens chemical industry manager. The Germany-based company, which operates in 190 countries, updates the mobile showcase with new technology annually, usually in December or January. Then it begins its travels around the United States to plants, EPCs and events – first in the South and then in the North as the weather improves.

The company, which is Europe’s largest industrial manufacturer and employs 372,000 worldwide, calls the mobile showcase “Measuring Success,” says Doug Child, director of the chemical industry in the United States for Siemens. The mobile showcase contains field devices, sensors and analytics – equipment to measure anything happening in a process plant, including pressure, temperature, levels and flow. The automation system in the mobile showcase shows how amassing data and analyzing it provides transparency to enable better control of the plant.

Part of the mobile showcase is available to feature equipment that’s specific to differing constituencies. At eChem Expo that space will include Siemens XHQ Operations Intelligence software that presents operational and business data in real-time to improve enterprise performance. Networking equipment in that space includes switches for Ethernet networks that provide the infrastructure for automation systems that connect field devices. A process safety system is included in the mobile showcase.

The automation system in the mobile showcase shows how amassing data and analyzing it provides transparency to enable better control of the plant.

Though some of what’s in the mobile showcase may seem familiar from the booths Siemens had at the most recent eChem Expo in 2016, the company intends is introduce some new products at this year’s exhibition. New offerings include a self-configuring and self-documenting I/O device called a Compact Field Unit. Another new set of products in the mobile showcase is the ET200SP HA line, which Siemens believes is the highest-density I/O available. The latter makes it possible to create architectures that could not have been achieved until now, Child says. Other new products in the mobile showcase include a SITRANS TO500 sensors that read up to 190 measuring points that plants could use in a in a variety of applications including tubular reactors. Plants formerly would have required as many as 50 devices to monitor the variables.

Siemens plans to use the mobile showcase to display MindSphere, its cloud-based approach to handling the Internet of Things, or IoT. MindSphere stores the data collected in devices in the plant in a single database. It’s also a platform that enables developers – included those at Siemens, those working for Siemens clients and those working as third-party developers – to create apps to use the information in the database. Siemens may develop more apps than the other developers create, the company says. “When you think of the iPhone and the apps that are there for it created by Apple and other companies, this is a very similar parallel,” says Child.

In one example of how MindSphere can work, Child notes that process plants suffer from unplanned downtime when a valve fails. “It can be really expensive if the plant is down,” he adds. An app that monitors valves can collect data that helps plants perform preventive maintenance. The app lets employees know when to expect a valve to fail, and it creates a schedule to forestall trouble. “You’re going to fix a valve before it fails, and you’re not going to waste a lot of time by scheduling maintenance too frequently,” he maintains. “There’s a lot of cost with that.”

Beside the new offerings, the mobile showcase will convey information about the COMOS platform that the company promoted at the 2016 eChem Expo. “You build a digital twin of the plant,” Child says of COMOS. “You digitize your plant assets.” It’s a three-dimensional view of the plant, an example of which will be on view on a screen in the mobile showcase. Attendees can “walk” the virtual plant and point to a piece of equipment to see a data sheet. Live readouts from gauges inform the user of what’s happening with pressure and flows. “It takes your training to a different level,” he says.

"When you think of the iPhone and the apps that Apple and other companies create for it, MindSphere is a very similar parallel."

Doug Child
Director of the chemical industry in the United States for Siemens Industry, Inc.

information on how a plant was designed and how it works was kept in several formats, Child continues. Now, the knowledge resides in digital reports from COMOS. When modifications are made in the plant, the digital twin changes to reflect them so everyone is working with the most recent version of the records. Without COMOS, the various drawings and other records that document the plant may not be updated when changes occur.

SIMIT simulation software enables virtual commissioning of a plant. It creates virtual chemical plant processes that enable operators to test the control system and operation training systems, Child says. The technology also helps integrate engineering, operations and maintenance, he says, noting that multiple disciplines can work concurrently instead of in serial. That can reduce time to market, he notes, and it also facilitates tweaks to specialty chemicals.

Attendees can “walk” the virtual plant and point to a piece of equipment to see a data sheet.

Siemens will also use the mobile showcase to display the Safety Instrumented System, or SIS. Users create a cause-and effects matrix or matrices that list incidents – like a temperature that’s too high, and the effects of those incidents and how to react – like closing a valve to bring the heat back down. In the past, plants have created spreadsheets to track that information, but now automation can step in to assist.

Siemens is also offering technology that facilitates using mobile devices in the field. That eliminates the need to transport a laptop and power cables to locations throughout a plant and promotes a wireless approach.

Besides a mobile showcase filled with solutions, Siemens will present information at two eChem Expo seminars. A presentation called “Digitalization in the Process Industries – How and Where to Implement” will focus on how devices in the field interface with the process control system. Some might view the seminar as “the life of a valve,” Siemens says. The other Siemens seminar, called “Harnessing the Power of Digitalization for Transformation and New Profit Streams,” will focus on MindSphere and how to use the information collected in the plant.

Turning their thoughts to the future, Child and Mack note that the world has 8 billion connected devices now but will have a trillion of them by 2030. Linking more devices on the internet will result in more paperless manufacturing because everything will be accomplished digitally. “It’s accelerating,” Child says of digitalization. “We see it in the engineering, we see it in asset performance and optimization, and we’ll see it with smart maintenance.”

Digital twins will continue to gain importance, Mack maintains. Companies will test new products in virtual models before releasing them, training will take place on digital twins, and operators will learn how to handle incidents before they occur, he says. COMOS may have seemed futuristic at the last eChem Expo, but it seems less so now as the use of digital twins continues to increase, he maintains.

And as the present slides into the future, Siemens plans to remain more than just a participant – the company aims to continue to help shape digitalization and mobility, Mack and Child agree. 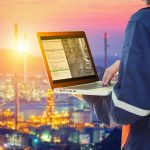