The Future of Energy Management in Manufacturing

Addressing a packed eChem Expo conference room, Nolen began her part of a panel presentation with an overview of Eastman and its energy program. The company, she noted, employs 15,000 people at 50 manufacturing sites around the globe. It serves customers in 100 countries and produced 2015 revenues of $9.6 billion she said.

Eastman bases its energy program on author Stephen Covey’s idea of principle-centered leadership, and its aims are to ensure the accuracy of utility information, maximize operating efficiency and incorporate energy efficiency into capital investments, Nolen said. The company thinks of its energy program strategy as five puzzle pieces and reserves the right to add pieces as needed, she noted.

Employee awareness is the first piece of the puzzle. The company made that a central tenant of its strategy when it revamped the decades-old energy program in 2010, according to Nolen. The company’s approach to energy awareness shares similarities with its approach to safety – in both cases the company works to create a mentality that employees put to use at work and at home.

The second puzzle piece, measurement, has required improvements in collecting energy efficiency data, Nolen continued, adding that “you can’t manage what you can’t measure.” Until six years ago, the company was collecting annual data with no definition of how to gather it, she said. Standard definitions now apply and monthly collection was instituted, she noted.

When revamping the company energy program, Eastman looked for gaps in its Energy Star procedures and began working with experienced energy advisors and taking advantage of federal programs that provide training and guidance. Through the federal programs the company meets with other firms to share energy-saving ideas. The governmental assistance represents the third puzzle piece, Nolen noted.

Fourth, Eastman mounts energy initiatives where “a centralized approach is the way to go,” Nolen told attendees. That way, various parts of the company can share best practices instead of having to develop each strategy on it own, she said. A questionnaire keeps management informed of progress throughout the company.

Energy projects, the fifth piece of the puzzle, received funding from the company for the first time when the revamping occurred, Nolen said. The budget has continued to increase, and has now reached $8 million a year, she said. When there was not budget, the energy team was not always viewed as effective, but it has now become a “welcome member of the team” in the company, she maintained, and the energy program now upgrades to more energy-efficient equipment.

Overall, the company has improved its energy intensity 9 percent since 2008, and without the energy program would have spent $30 million more for energy last year alone, Nolen said.  Its awards for 2016 include the Energy Star Partner for Sustained Excellence as well as the Ethisphere’s World’s Most Ethical Companies, she noted. “A focused effort yields results,” she concluded.

Another speaker, Bryce Hudey of the U.S. Department of Energy’s Oak Ridge National Laboratory, agreed with Nolen that planning and measurement can pay off in improved energy management. As site energy efficiency and sustainability manager in the Facilities Management Division of the Facilities and Operations directorate at Oak Ridge, he works to trim the $40 million utility bill.

Oakridge, Hudey noted, began as part of the Manhattan Project that produced the first nuclear weapons but later become a Department of Energy research facility, Hudey said. It’s the largest such site, with 4,400 employees and more than 5 million square feet of space in 237 buildings and 20 trailers, he noted.

“The site itself is really a small city,” Hudey said. “We have an electric distribution system, a couple of central steam plants and a sewage treatment plant on site. We also have a hotel so that when users come on site they can stay the night, continue their research and be close at hand.”

The strategy for saving energy in that large and diverse situation focuses on data, Hudey told the crowd. To that end, smart meters are replacing the manually read meters used in the plant five or six years ago, he noted. Starting with electricity, Oakridge’s highest-cost utility, and moving into steam, natural gas and chilled water, the facility is amassing data, he said.

After beginning to capture data, the challenge becomes figuring out what to do with it, Hudey said. On a basic level, the data is put into a form that building managers can understand and use. Dashboards can aid building occupants as well as building managers in the effort to conserve energy, he noted.

Meanwhile, Oakridge is moving beyond a focus on utility data and has instead developed a platform that integrates energy data from utility meters, automation systems and other operations so that the facility can use it in a combined fashion, Hudey said.

Factors at work these days for utility companies include flat load growth, which eliminates the need for additional load-base generation; more interest in renewables and distributive generation, which the TVA has to integrate; more efficiency in demand; and increasing regulation of coal and other fossil fuels, Quillen said.

Between 2004 and 2008, load growth was 2 percent to 4 percent annually, but since then it has slowed to growth of just half a percentage point annually, Quillen noted. Some pie charts that accompanied the presentation showed showed how the choice of fuels is changing at the TVA. In 2007, for example, coal accounted for 58% of the mix, but that fell to 29 percent last year and is expect to plummet to 18 percent by 2025, according to the charts.

“One piece that’s growing is the energy efficiency slice of the pie,” Quillen maintained. Energy efficiency accounted for 7 percent last year and is expected to reach 12 percent by 2025, according to his charts. Energy efficiency refers to advances the TVA is helping its customers make to conserve, he noted.

“We’re at a period of time when it’s advantageous for us to go out and spend money to help our customers reduce their energy use versus us taking on the risk of building new access,” Quillen said. It’s not appealing to build plant capacity that could take up to 40 years to pay for itself during a time of slow load growth, he maintained.

Looking to the Future

Panel moderator David Hopper, head of Hopco Inc., a consulting company specializing in energy and utilities management, asked the panelists what changes they expect at plants in the next few years.

Quillen said the TVA will regard energy efficiency as a resource and will proactively identify opportunities to help customers improve, Hudey expected to keep pursuing more and better data and data integration for continuous monitoring at Oakridge, and Nolen cited water conservation as a growing need and a focus area for Eastman’s energy program as well as an effort to pursue energy management throughout a site instead of in silos.

In answer to another question, Nolen said Eastman added a number of sites through an acquisition in 2012, and incorporated some of the the new sites’ best practices into the Eastman energy program. Eastman integrates newly acquired sites into the energy program within three years, she said.

Responding to a question on whether natural gas prices will remain low, Quillen said the TVA does not want to commit to any type of fuel and thus maintains capacity to operate powered by any of them. That way, the TVA can avoid some of the volatility of energy costs, he said. Meanwhile, concerns about the possibility of increased regulation are prompting Eastman to convert some of it’s coal-fired facilities to natural gas, Nolen said.

As the quest for energy savings continues Eastman is eying possible changes in distillation, according to Nolan. The TVA sees opportunities to reduce energy consumption by changing to more efficient lighting, such as LED, Quillen noted. Improvements in energy storage could bring heavy change, he continued.

Another question centered on whether time-of-day, load-leveling technology will become more or less important. Quillen responded by noting that the TVA made a major billing structure shift a couple of years ago to the local power companies it supplies. That provided incentives to spread the load at plants, he said, and now that’s awareness of timing is filtering down to residential accounts.

Hudey noted in response to a question that “one size fits all” approaches to energy management don’t work at a facility with as much complexity as Oakridge. Instead, the facility identifies specific problems and then works with the manager and occupants involved, he said.

Nolen said Eastman has set a goal of 20 percent energy intensity reduction in 12 years and made that commitment to the U.S. Department of Energy. The company translates that goal into BTUs and divides them among larger sites and asks for a personal performance commitment, she said. The company then creates a scorecard to monitor progress. 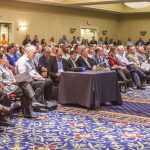 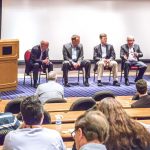